This fall, American Communities Project Director Dante Chinni co-taught a class at Michigan State University’s J-School, Journalism 407, Advanced Reporting. In that class, Chinni and veteran journalist and doctoral candidate Sooyoung Shin taught 14 students the basics of data reporting and how to use the ACP typology to cover the 2022 Michigan Governor’s race. 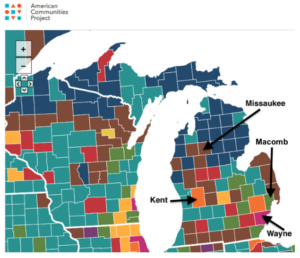 The students were broken into teams and each team was given a community to get to know and report on: Kent County, (an Urban Suburb that is also home to Grand Rapids), Macomb County (a blue-collar Middle Suburb near Detroit), Missaukee County (a rural, Trump-leaning Working Class Country community to the north), and Wayne County (the Big City that holds Detroit).

The students used data to study those places and went on reporting trips to do sit-down interviews with voters. They became experts on their “beats” and saw the election through the eyes of their communities.

The pieces below are the final post-election stories from those student teams.