Just a few miles over the Colorado-Wyoming state line, I crest a hill on the two-lane and laid out below, a swath of emerald Ireland has been pasted, east to west, into the open western range. The Little Snake River flows into the Yampa, which empties into the Green before the mighty merger with the Colorado. In the West, water is gold.

You’ve never heard of Baggs? Most folks in this valley are quite happy about that. They live in a little bubble where, with hard work, they raise cattle and children and pray that the river flows. They are happy the outside world — with their perceptions of crime, social problems, traffic, and people who don’t understand what it means to grow up attached to the land — is held at bay. Residents value their independence yet depend on and support one another. They know the world is changing, but they want the pace to be slow, accommodating to their patterns of life, of what they feel has worked well for generations.

Broader Carbon County (pop. 14,711) stretches up to the big town of Rawlins, where people from Baggs, Savery, and Dixon, the three tiny burghs that hug the river, go for groceries, and, according to some, drive back home as fast as they can. Baggs has two gas stations and a school. Savery has a museum and a cross street. The famed Immigrant Trail is only 25 miles north of here, that scar in the plains of broken wagons, shallow graves, and desperate pioneers walking, shuffling, crawling, and starving their way west. Why didn’t they follow the river? There must be a good reason, but folks here are happy that the flood of people passed them by then and seems to pass them by still.

For 150 years, ever since the Utes were driven off the land, this has been ranch country. The river provides water to grow enough winter feed, and the surrounding lands sustain cattle during the summer, at least if it rains. Oil and gas jobs and money come and go with the price of hydrocarbons and the pace of exploration. The oil fields provide a burst of jobs in good times, but a lot of the workers migrate to Texas when drilling slows down. The other primary economic drivers of rural, Graying America — health care, government administration, and retail — are located up in Rawlins, the county seat, and seem to have largely passed Baggs by.

As is also typical of Graying America, the county is predominantly white and middle-income with a sizable senior population and a politically conservative orientation. Just last month in Wyoming's GOP primary, challenger Harriet Hageman defeated incumbent U.S. House Rep. Liz Cheney 72% to 21% in Carbon County after Cheney's senior role on the House Select Committee to Investigate the January 6th Attack on the United States Capitol became a key issue in the race. (Cheney had won 71% of the county's vote in November 2020.) At the presidential level, the county gave Republican nominee Donald Trump 75% of the vote in 2020, up from 69% in 2016. GOP nominee Mitt Romney garnered 64% of the vote in 2012, and Republican candidate John McCain received 63% in 2008.

VALUES, CULTURE, AND COMPOSITION OF RESIDENTS

Linda Fleming, 81, has filled a lot of roles for this small community, including many firsts. She once served as mayor and taught science in the high school for decades. She was the first woman to sit on many councils and boards, and the first woman from her multigenerational Baggs family to go to college. Today, Fleming is the unofficial historian of Baggs, and it’s clear why.

“We used to say that my grandfather was the first white or European child born here, but that's not true. I think he was about third. That was in 1883,” Fleming says. “His wife, my grandmother, they were from Missouri. She walked all the way behind a wagon kicking milk cans, and they ended up here, too.”

As Fleming describes Baggs today, “We are a very homogenous community. Very white, I would say, lower middle class. Even today, I don't think we know what we don't have.”

Cultural flash points have surfaced lately, according to Fleming. “We got grants for the community library a few years ago. But from the Wyoming Humanities Council for book discussion, their books were often about minorities or immigrants, or somebody hitchhiking across the country, broke, and all that type. When we'd have our book discussions, there'd be people say, ‘Well, I'm just kind of angry. These are the worst books you've ever heard of, and why are we reading this?’ ”

While diversity seems to be on the margins of Baggs still, working hard is a central attribute, and residents show up when their neighbors have hardships. “We have a work ethic here. They view others who maybe don’t have a job as they don't try hard enough. I think that's some of it,” Fleming says. “I work with our food bank here. There's people that look at me like, ‘Linda, why are you doing that; they need to work harder.’ But then someone needs some help with food and those same people will say, ‘Well, we have a bit more than they do,’ and they donate some food.”

The value of cultivating a work ethic is echoed by another educator, Cindy Cobb, who teaches third grade and is marking her 40th year in the same classroom. She lives on a family ranch that’s been in her family for 135 years or seven generations.

“The most important thing we need to teach kids is a work ethic. It makes you feel better when you work,” Cobbs says. “I was putting in a greenhouse, and my 86-year-old dad comes by on his motorcycle. He goes, ‘You must like to work’ because I was hauling in logs and everything else. And I said, ‘I blame you because … you and mom have taught us to work. And I said, ‘We're happier when we're working. And he goes, ‘You're right.’”

Here a caring, can-do spirit is woven into daily rhythms, especially when people can’t take care of themselves. Immediately an example comes to mind for Cobb. “We have a guy that hurt his back really bad. All the ranchers brought their hay equipment in and helped that guy get his hay in,” she says. “It's not like they are all best friends; maybe even some of them have had issues, maybe over water or something, but they still showed up to help get that hay in.”

This may be because watchfulness and connection are all around. “In this valley, everyone's watching. So, if something happens, oh, everyone talks about it. It's everyone's responsibility. We look out for each other and each other’s kids… It takes a village, and we have this village,” Cobb says.

That roll-up-your-sleeves, caring character extends to stewarding the land, she says. “If we destroy the land, we put ourselves out of business, because we have to have our crops and we have to have grazing. If we over-graze, we're not going to graze next year.”

Worry creeps in about water’s scarcity irreversibly affecting these parts. “We’re part of the Colorado River water system. We are the headwaters. We have our water rights, but I'm afraid one of these days water rights won't matter because there just is not enough water,” Cobb says. “I used to show my kids a movie years ago called Water's More Precious Than Oil. They were talking about over in Africa. But we are there right now. We are there.”

HOW NEWCOMERS FIT IN

Holding a different perspective is Nikki Devlin, who moved to Baggs about 10 years ago with her husband, a state trooper. Devlin does not like the crowds and pace of big cities and has found her home here. “It's very picky who they allow to stay here.... My husband was not well liked at first, because he's law enforcement. But then he was accepted. He was here a year before the rest of us. So, when we moved here, they just had open arms, they’re like, finally you’re here. There was this little voice that said, ‘Welcome home.’”

In her years here, Devlin has observed that residents broadly view government in a negative light, particularly when it brings sudden change. “No one likes the government, if they bring up a new rule or regulation, and all hell breaks loose. And that's what you hear about for six months, and then either they overturn it, or they figure out how to live with it. That's just what as a rancher you do,” she says.

Overall, deliberation is valued over pushiness — a behavior pattern some newcomers don't adhere to. “I've seen people come, and they tried to change things way too fast. It was more of I'm right, and you're wrong,” Devlin says. “They were trying to push various beliefs. Everyone here is like, ‘But the way we do it works just fine, might be a little slower, but we do it and it works well. When there’s a million different rights, don’t tell me I’m wrong.’ I can’t say they’re scared of change, but they’re skeptical and they want to look at it, think about it, and then move forward.”

Given this skepticism, I ask Devlin if there were a job opening for a schoolteacher, would a New York Democrat be welcomed?

Devlin answers: “As long as you don't start pushing your political beliefs, religious beliefs, you know, basically, don't tell other people how to live. This is a conservative, definitely not a liberal, place. But as long as that person didn't come in and start flinging the rainbow flag and forcing it upon people, they would be OK. They want to pick and choose what they want to come in… It seems like we're this little secret spot in the world and somehow, it's protected them.”

Educator Cindy Cobb echoes this protective thought. “Maybe we're happy the world is out there, and we don't have to deal with it. Not a lot of people travel and get out and see anything beyond what we have here. I'm not on the news anymore. I turned the news off a couple years ago, during the election. After that, I was done.”

Devlin, for her part, notes the ties that do bind all over. “I have never really traveled and got to see the world beyond a few places, all of which are sort of like Baggs.” She mentions a well-traveled friend who tells her about different fashion and food in other cultures. “But,” she points out, “they all talk about how much they love their kids and want them to succeed and sometimes want to twist their heads off, which is exactly what I feel about my kids. I think probably most people are like that.” 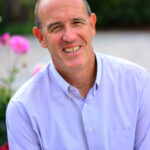 Grant Lichtman, an author and educator, has begun a long, audacious journey in a small RV to understand what wisdom lies in overlooked communities and cultures that we are losing amid the cacophony of news media, social media, political media, and one-minute “influencers” who are paid to be anything but wise. As Lichtman travels along “Wisdom Road," his big question for people he meets is: “What elements of your cultural traditions might help heal the deep divides in our society today?”