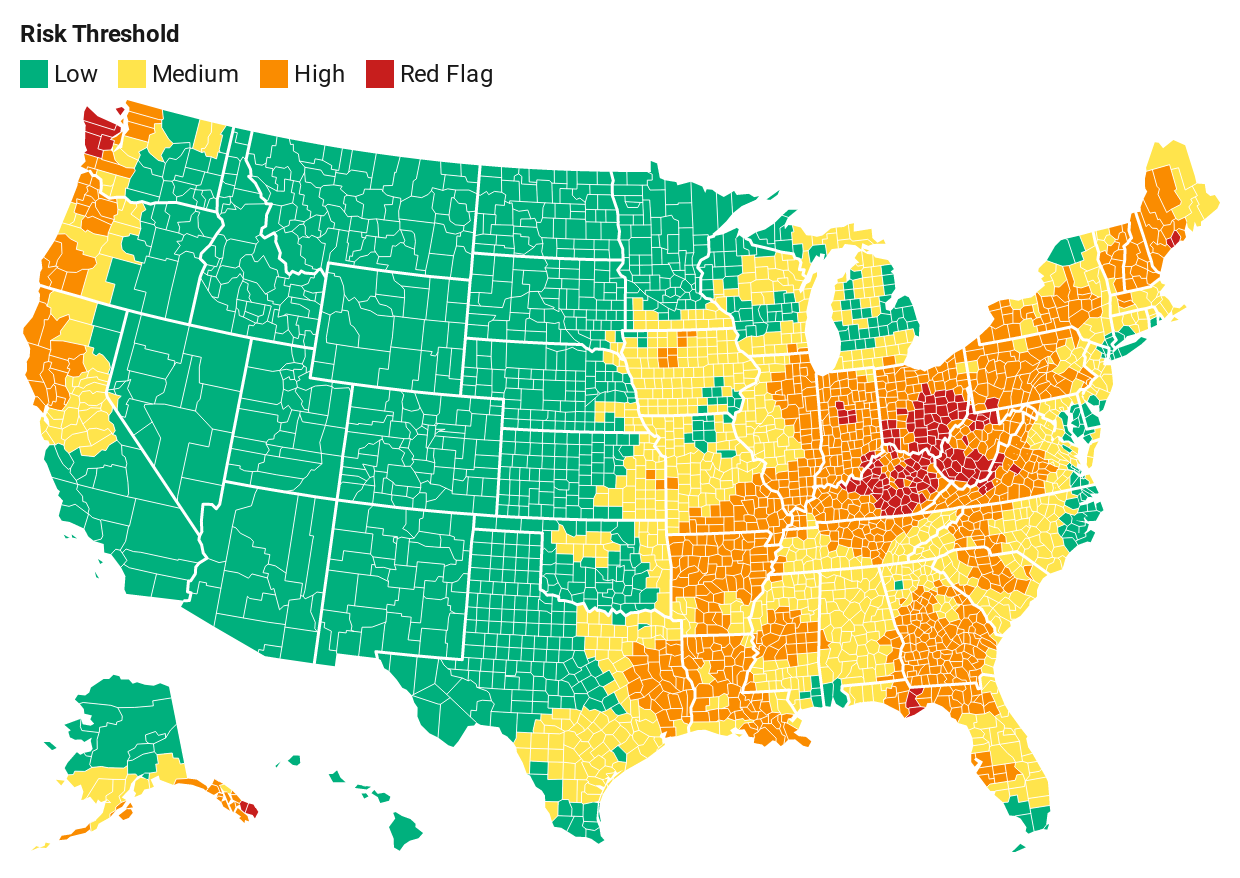 With the Biden administration elevating climate change concerns to the national agenda, the American Communities Project leveraged data from Four Twenty Seven, a physical climate risk data firm and affiliate of Moody’s, to understand how the risks manifest by ACP type — and where populations and infrastructure may be especially vulnerable.

Four Twenty Seven analyzes several physical risks to the U.S. landscape, including sea level rise; hurricanes; extreme rainfall; water stress; and heat stress, characterized by higher temperatures. Many of Four Twenty Seven’s projections through 2040 show the risks are regional, as illustrated in maps below. We also parse the degree to which high risks differ by ACP type. Six key takeaways emerge from filtering:

It’s unsurprising that sea level rise presents the greatest threat to populations living along the U.S. coastline — most of the country’s geography is in no danger of rising seas. There are several zones to watch. The mid-Atlantic region into the upper South — from New Jersey to North Carolina — contains a dozen counties deemed red flag for their significant exposure of coastal flooding. These counties have a combined population of 863,519, based on U.S. Census estimates in 2019. South Florida and counties in Louisiana, Mississippi, and Texas ringing the Gulf of Mexico are red flag or high risk. A few patches of the Alaskan coastline, too, are in the red flag zone. The Pacific Northwest holds about a dozen counties with a high risk of sea level rise. (Scroll over the map to see a county’s risk level and community type designation.)

As mentioned above, rising sea levels are a great danger in Military Posts. Of the 89 counties, 19% are dubbed red flag or high risk. According to a Union of Concerned Scientists’ report in 2016, “The military is at risk of losing land where vital infrastructure, training and testing grounds, and housing for thousands of its personnel currently exist.” This could have a real impact on military readiness by reducing operational capacity.

Communities of color and diverse, densely populated places are also in the line of danger. For the 43 Native American Lands, the 370 African American South counties, and the 47 Big Cities, the numbers are 14%, 13%, and 13%, respectively. Many non-white households living near the coasts, particularly in the African American South and Big Cities, haven’t received sufficient flood investment protection and don’t have flood insurance. Four Twenty Seven explored the link between race and climate change in a piece in July 2020. Meanwhile, 12% of Urban Suburban counties face red flag or high risk.

The Dividing Line for Hurricanes

More of the U.S. population faces the danger of hurricanes. Consider that the entire coastlines of the Carolinas, much of Florida as well as the Louisiana and Alabama coastlines are deemed red flags. Beyond those red zones, the risk is high in all the states along the eastern seaboard and the Gulf of Mexico. Hurricanes are low or no risk moving westward. (Scroll over the map to see a county’s risk level and community type designation.)

As we’ve seen in recent years, hurricanes can wreak havoc on the regional infrastructure, impeding a community’s recovery. In the article “The Effects of Infrastructure Service Disruptions and Socio-Economic Vulnerability on Hurricane Recovery,” the author-researchers surveyed nearly 1,000 households in Florida after Hurricane Irma and found “that physical damage to property, disruption of infrastructure services such as loss of electric power and cell phone/internet services and other factors (i.e., homeowner’s or renter’s insurance coverage, receiving disaster assistance and loss of income) are significant predictors of post-disaster recovery when controlling for age and race/ethnicity.”

Drilling down, hurricanes are of the greatest risk in many densely populated and diverse places. In this rich mosaic, the standout is the African American South, with 64% of counties at red flag or high risk, and where populations are vulnerable because of housing conditions. Two other community types see close to half of their counties in the danger zone: 48% of Military Posts and 45% of Urban Suburbs face red flag or high risk of hurricanes. The same is true of more than a quarter of Big Cities.

For extreme rainfall, the risk picture looks markedly different, covering more of America’s interior. The Midwest’s Ohio, Appalachia’s West Virginia and Kentucky, and Washington State’s coastline are dubbed red flag. But high risk fans out across the Midwest as well as the South, Northeast, and Pacific Northwest. In March 2020, severe weather in the Midwest and Ohio Valley, including Missouri, Ohio, Kentucky, Tennessee, West Virginia, and Pennsylvania, caused $2.6 billion in damage, according to NOAA estimates. (Scroll over the map to see a county’s risk level and community type designation.)

Water stress risk covers much of America’s interior, many sparsely populated places that make up the country’s breadbasket as well as swaths of more densely populated ones, including along the East Coast. Red flags show up in many regions: a small pocket of the Midwest, chunks of the Plains, including the Ogallala Aquifer, the intermountain West, the Southwest, as well as sizable portions of California, including the Central Valley. The Department of Homeland Security reports that “water and wastewater systems, energy, and food and agriculture are the critical infrastructure sectors most vulnerable to drought conditions.” (Scroll over the map to see a county’s risk level and community type designation.)

More and intense hot days are red flag risks in almost all of Missouri, much of Illinois, southwestern Iowa, and a touch of Arkansas. However, most of the Midwest is in the heat zone. Risk is high for nearly half of Ohio, all of Indiana and Oklahoma, part of Wisconsin, most of Iowa, Nebraska, Kansas, Kentucky, Tennessee, and the tip of Texas. Note that humidity, an important heat stress factor for assessing heat-related health risks, is not included in Four Twenty Seven’s analysis.

Then, perhaps not surprising, the southern part of Arizona, part of the Deep South, Florida, and Hawaii are at high or red flag risk for extreme heat. (Scroll over the map to see a county’s risk level and community type designation.)

Heat waves can also take a toll on physical infrastructure, particularly in cities, and the EPA recommends protecting roads and bridges with materials that can withstand heat as well as bolstering energy efficiency to avoid power problems. Arizona, for its part, maintains a detailed extreme heat response plan.

In the Midwest and South, Evangelical Hubs are expected to bear the brunt of the heat, with 65% of its 372 counties falling into the red flag or high risk categories. Working Class Country stands at 51%, while 50% of Rural Middle America’s 599 counties, running across the country’s northern half, are deemed red flag or high risk. This has the potential to affect labor productivity because many jobs in these parts are performed outside or near machines radiating heat.

A variety of diverse and more homogeneous suburbs should expect challenges here as well, including 34% of the 77 Middle Suburbs, 32% of the 222 Exurbs, 32% of the 47 Big City counties (which often include suburbs), and 22% of the 106 Urban Suburbs.

The Biden administration is taking these physical risks to the U.S. seriously based on its early actions, budget, and personnel. On Inauguration Day, President Biden signed several executive orders on climate, including recommitting the U.S. to the Paris climate accord to reduce greenhouse gas emissions and adapt to the effects of climate change. Moreover, Special Presidential Envoy for Climate John Kerry and White House National Climate Advisor Gina McCarthy are putting job creation at the center of the climate agenda and taking a more focused approach to tackling environmental inequities. The administration is also raising up the issue globally, hosting a climate summit of world leaders on April 22, the 51st Earth Day.