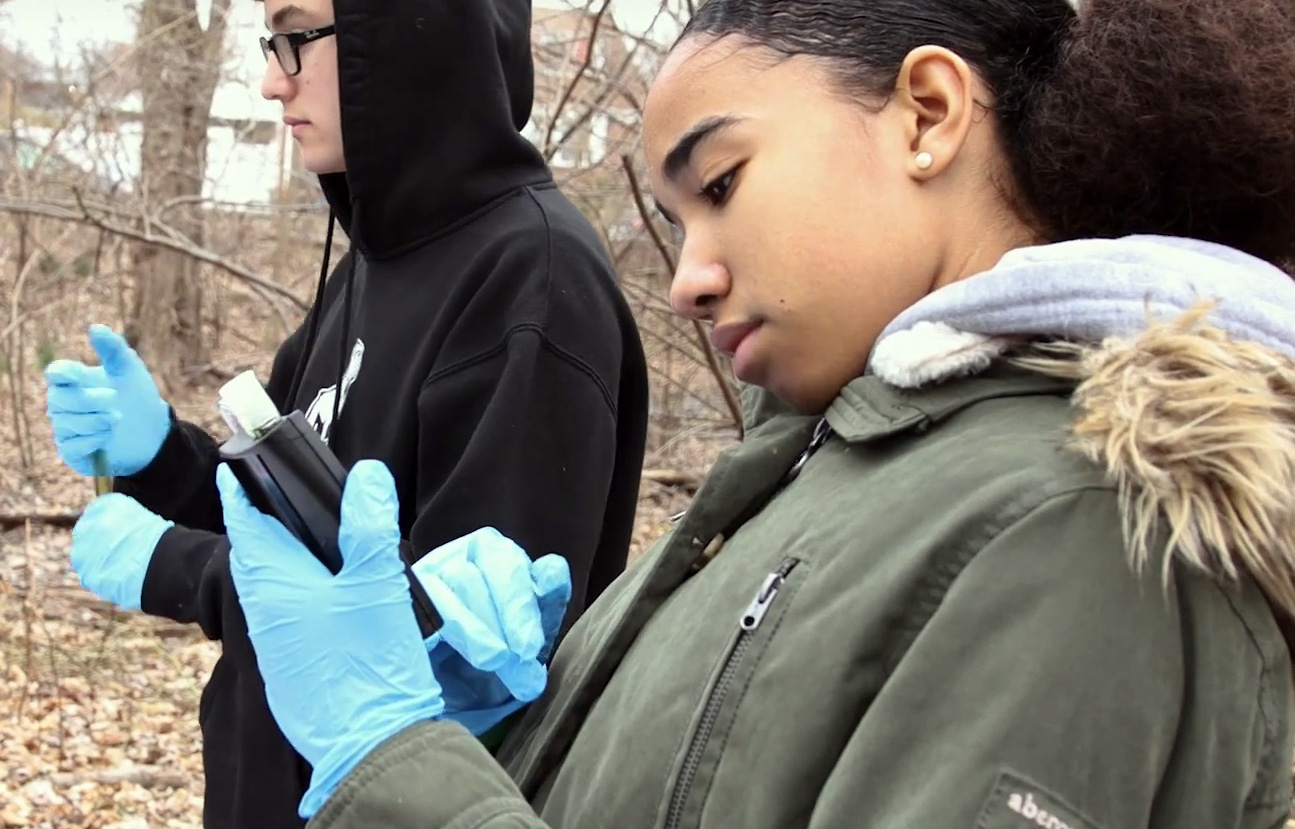 For the average middle school student, it sounds almost too good to be true. What if, instead of staring out the window while your teacher reads dryly from a science textbook, you could be out in the fresh air learning those same lessons while getting your hands dirty?

Last year, students at Benjamin Franklin Middle School (BFMS) in Teaneck, New Jersey (in the Urban Suburb of Bergen County), got to live that dream — if only briefly before Covid-19. As part of the National Environmental Education Foundation (NEEF)’s Greening STEM initiative, the middle school partnered with the Teaneck Creek Conservancy and Samsung to provide hands-on field experiences for several New Jersey middle school classrooms, engaging seventh-grade students in a water quality monitoring project and eighth-grade students in a macroinvertebrate biomonitoring study at their local watershed.

“When we do hands-on and we do labs and we record, I understand it more because I can really visualize it and see what I’m actually doing,” explained one student. Another talked about the thrill of understanding the lessons using his senses and “finding new things instead of being told what they were.”

“This is what scientists do,” said Stephanie Paz, a science teacher at the school. “They actually go out and explore what’s out there and try to solve actual problems.”

Projects like the BFMS Greening STEM program are at the heart of NEEF’s mission of lifelong environmental learning. Our goal is simple: to make the environment more accessible, relatable, relevant, and connected to the daily lives of all Americans.

Through our programs and initiatives in K-12 education, health, and conservation, we create opportunities for people to experience and learn about the environment in ways that improve their lives and the planet’s health. Our approach embraces people of all perspectives, ages, backgrounds, geographies, and identities. This strategy is rooted in behavior change theory — by conveying positive information and promoting practical steps, NEEF meets people where they are and helps them to be positive agents of change.

Greening STEM is an inquiry-based approach to K-12 education designed to encourage environmental literacy and stewardship and get kids interested in pursuing a career in STEM (science, technology, engineering, and math). Projects are grounded in local, tangible environmental issues — for example, wildfires or oil spills — allowing students to help research and solve problems that are relevant to their communities.

NEEF’s Greening STEM programming focuses on middle school education, identified as a likely starting point for the STEM education gender gap. It is also when students begin to specialize their interests; if STEM isn’t a priority at this time, it is difficult to cultivate that interest later.

We know educational access disparities affect students’ abilities to engage in STEM learning. The Education Commission of the States’ Vital Signs report shows that while 46% of white students are at or above proficiency in eighth-grade science, only 11% of Black students and 18% of Hispanic students meet that benchmark. Further, only 50% of eighth-grade science teachers in majority-Black districts report that they have all or most of the resources they need to successfully teach.

Rooted in Personal and Community Connections

While the curriculum for each Greening STEM project must adhere to Next Generation Science Standards principles, educators are encouraged to customize the project to make it more relevant and representative of their local environment, including cultural, historical, and sociopolitical issues. By focusing instruction on local issues, students are more likely to take a personal interest in learning.

“One of the most amazing parts of this partnership [with NEEF] is that the project was in the Teaneck area, providing easy access to our students,” said Terrence Williams, principal at BFMS. “Whether you’re dealing with pollution or preserving public space, these problems are personal for students who live in this community. It’s about taking something small and providing a path for a student to expand on that passion.”

American Communities Project (ACP) data is also considered during the Greening STEM development process. For example, proximity to public land sites and overall area income can influence whether a project might need to consider funding for group transportation, lunch, or park fees. Armed with this information, we can then approach local companies or nonprofit organizations for financial support.

The following are other examples of recent successful Greening STEM partnerships made possible through NEEF’s evaluation criteria listed above.

NEEF supported a collaboration between students from the Tucson, Arizona, area and park biologists at Saguaro National Park to conduct the “Lost Carnivores Wildlife Monitoring and Citizen Science Project.” The project involved hands-on investigation and on-the-ground data collection to monitor the health and well-being of five small carnivore species in the Tucson Mountains area, including the kit fox, common raccoon, and three species of skunk.

Students were responsible for checking wildlife cameras in the field and using available data to determine the best locations to place their own cameras. This on-the-ground data collection provided an opportunity to practice real-world wildlife monitoring techniques while working alongside seasoned park professionals in a beautiful natural environment.

When asked how they felt about their time in the field, one student responded, “I felt like a real scientist.”

In collaboration with Cabrillo National Monument and the San Diego City Libraries, “The EcoLogik Project: Connecting the Next Generation to Nature and Technology” brought together 62 young girls (ages 9-16) and their families from underrepresented communities across San Diego to the natural resources of nearby Cabrillo National Monument. Almost 80% of the students had never been to a national park before this experience.

With this project, the Cabrillo National Monument Science Education Initiative worked to raise awareness and connectivity of ecology and technology through increased scientific outreach, communication efforts, and direct public engagement. The project also strengthened community engagement and collaboration by encouraging a greater diversity of student, public, volunteer, and stakeholder participation.

In a diverse, urban environment, the Cabrillo National Monument was able to use the EcoLogik Project to create a culture of inclusion that better serves the community at large.

NEEF is using ACP data to plot out a course to introduce Greening STEM into more communities, especially communities of color and under-resourced neighborhoods. These communities traditionally lack the same access to or comfort in visiting public lands, participating in environmental education, or benefiting from healthy environments as majority white or high-income communities.

Nearly half of NEEF’s grant requests come from two of the major ACP regions: Big Cities and Urban Suburbs.

In the ACP’s Big City counties, there are fewer opportunities for children to take part in outdoor experiential learning opportunities. A study from The Nature of Americans found that 71% of Black children took four or fewer nature-oriented trips in the past two years, compared with only 35% of white children who took the same number. In fact, 32% of white children took 10 or more trips, compared with only 8% of Black children.

At NEEF, we aim to bridge this gap by seeking out partnerships with school districts and conservation groups located in these Big City communities. We’re undertaking several projects in the 2020-21 school year as part of the NPS-21st Century Community Learning Centers Greening STEM Grant — a collaboration between NEEF, the National Park Service, and the U.S. Department of Education — to provide academic enrichment during non-school hours for students who attend high-poverty and low-performing schools.

NEEF is also working with Royal Caribbean Group, Miami-Dade County Public Schools, and the Phillip and Patricia Frost Museum of Science in Miami, Florida, to develop a series of biodiversity-themed Greening STEM learning activities for use in the classroom, at home, or virtually. These activities will explore biodiversity issues by focusing on native, non-native, and invasive plants, insects, and lizards. The project will culminate with student participation in the City Nature Challenge, a national BioBlitz held each April. 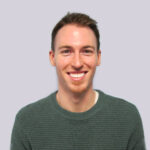 Michael Pope is the Content Marketing Manager for the National Environmental Education Foundation (NEEF). In addition to writing feature articles for NEEF’s K-12, conservation, and health initiatives, he also manages the NEEF Connect, an online newsletter providing entertaining and educational content for thousands of readers across America.